Honda Center stands as one of the premier entertainment and sports venues in the country.

Honda Center annually hosts top-name concerts, exciting sporting events and family favorites including Disney on Ice. In just the past few years, capacity crowds filled Honda Center for events such as UFC, The Rolling Stones, Garth Brooks, Maroon 5, Fleetwood Mac, Ariana Grande, Justin Timberlake, and more. Since opening, the arena has hosted over 4,000 events and more than 42 million guests have walked through its doors. 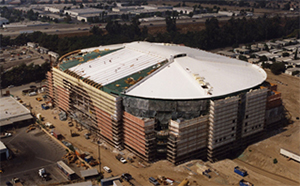 Owned by the city of Anaheim, Honda Center officially opened as Anaheim Arena on June 17, 1993. A few days later, Anaheim Arena welcomed fans for the first timewith a sold out Barry Manilow concert on June 19, 1993. In October of that same year, the venue was renamed Arrowhead Pond and hosted the first Mighty Ducks of Anaheim game. The year 2005 began a new era as Henry and Susan Samueli took ownership of both the team and the venue management company, Anaheim Arena Management, LLC. In 2006, the official name of the arena changed to Honda Center, along with the team to Anaheim Ducks.

Honda Center continues to make improvements to the facility, all in the interest of creating a great experience for every visiting fan. The venue’s most expansive upgrade, The Grand Terrace Project, newly rebranded as the Brewery X Biergarten, features a 15,000-square-foot indoor-outdoor entertainment space, a 250-seat full service restaurant on the main level and an expanded Anaheim Ducks team store. A state-of-the-art multimedia platform has been installed throughout the arena, incorporating more than 500 HD Monitors into the venue, creating a world class immersive live entertainment experience. 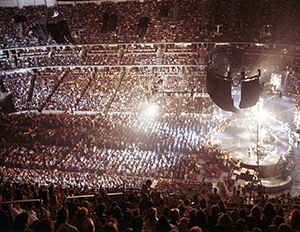